John Devaney has painted the figure since the 1970s, exhibiting in galleries and museums throughout New England. New York, and nationally, including the Lyman-Allen, Springfield, Newport Museums, Harvard University VES, M.I.T. List Visual Art Center, Miami-Dade College, and San Diego Museum of Contemporary Art. He is a National Endowment Regiona Fellow, a Harvard University Research Fellow, and a MacDowell and Yaddo Colony Resident. His murals are at the University of Connecticut (Storrs) and the Maude Morgan Art Center, Cambridge, MA.

His earliest work centered on the human figure in swimming spaces, then expanded to animal and mythical swimmers. More recently, the cityscapes of New York and landscapes of Nantucket have become the “oceans” in which his figures move and flow, such as tourist crowds pouring off a ferry or a polyglot wave of New Yorkers surging down Fifth Avenue. 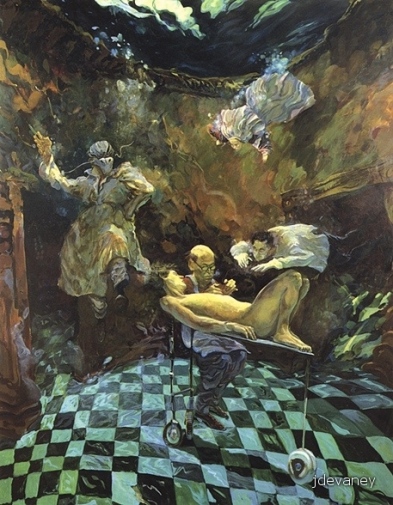